History of the Vulcan Golf and Country Club

The earliest record of the Vulcan Golf Club shows that the club began to operation in 1920 with the location of the course bounded by the present Memorial Drive, Elizabeth Street and Fourth Street South.  The first executive as recorded in 1924 included:

The grass was kept in playable condition by a herd of sheep owned by E.G. McPherson and on occasion when the sheep herders (the McPherson girls) were dozing or became engrossed in good reading, the sheep were found strolling down Main Street, much to Pop McPherson’s consternation.

In 1946 the club house building which had previously been a pest house and had been donated to the golf club by the town, was sold to M.O.Peterson for $250.00 A room which was to be used as a club house was built onto the swimming pool dressing rooms.

In 1951 the town bought 91.5 acres of farm land at a cost of $9,150.00 from Howard Spaeth and leased it to the golf club for 99 years.  This land was seeded to grass and for two years the seed reaped was sold to a seed company and the hay was baled and sold for feed.  This one operation netted over $6,000.00 for the two years and gave the club a good financial beginning for the new course.   On May 24, 1955 in hip-dee snow, a group of hardy men and two women (wives-needless to say) braved the elements for the sake of a dream of future pleasure and planted trees which now beautify on of the loveliest country golf courses in southern Alberta.

The same year the cement for the basement of the club house was poured in bitterly cold weather.  An oil company heated water for the cement and workmen were sheltered from the cold by a large plastic roof.

The Panabode building was erected in 1956 and all was ready for operation.  The first president t of the new club was Bob Willard who together with Ron Buehler, Charlie Fulton and Harry LaRoche, Harris Matlock, the Neilsen brothers and various other die-hards are largely responsible for the success of the new club in its earlier years.  The board of directors included Bob Willard, Ron Buehler, Jack Moffitt, Charlie Fulton and Harris Matlock.  Since that time shrubs and flowers have added a colorful touch to the club house grounds.  Fairways and tree plots have been well cared for.  To quote from May 3, 1972 edition of the Vulcan Advocate “The course has wintered well, the trees and the well grassed fairways are beginning to turn to their summer green.  The new grass greens are in good shape for the start of the second full season and have added greatly to the interest and enjoyment of the course.  Underground watering installed last year and an increase in the size of the storage dugout completes major outside improvements to the course”

The clubhouse is well equipped to serve its purpose.

The Ladies’ Club was organized with the beginning of the new golf course.  Lorie Horne was the first president and the first few years saw an active membership of some forty golfing women. They  held raffles, teas,fashion shows, Sunday morning breakfasts and did much catering at the club house for various golfing activities, to raise money used for the improvement of the golf club house. Credit must be given the Ladies’ Club for the complete furnishings of the main lounge and the kitchen.  They have made sizable donations to the Men’s Club for the betterment of the course.

History of the Vulcan Golf and Country Club by Ron Buehler

Up-Dating the history of the Vulcan Golf Club finds the course being very well kept up.  The fairways are in exceptionally good conditions and have been over the years.

A new workshop and golf car storage shed was erected in 1984, this give the grounds maintenance crew a good place to maintain and store the necessary machinery and equipment.  Another golf car storage building was built in 1986.  The club now has inside storage for about 60 cars.

The membership has increased to approximately 500 and is holding about that level.  The club enjoys a good number of green fee players from the district.  Local and invitational tournaments and a league night help to keep the members interested.  Several out of town groups stage tournaments s on weekends which help the revenue of the club and provide extra funds to make improvements to the course.

The water sprinkler system is in need of major repairs and after the close of the 1986 season main 6” and 4” aluminum lines are in the process of being replaced with rigid plastic pipe.

So over the years, the golfers of the town and district are still enjoying the benefits of a well maintained local golf course. 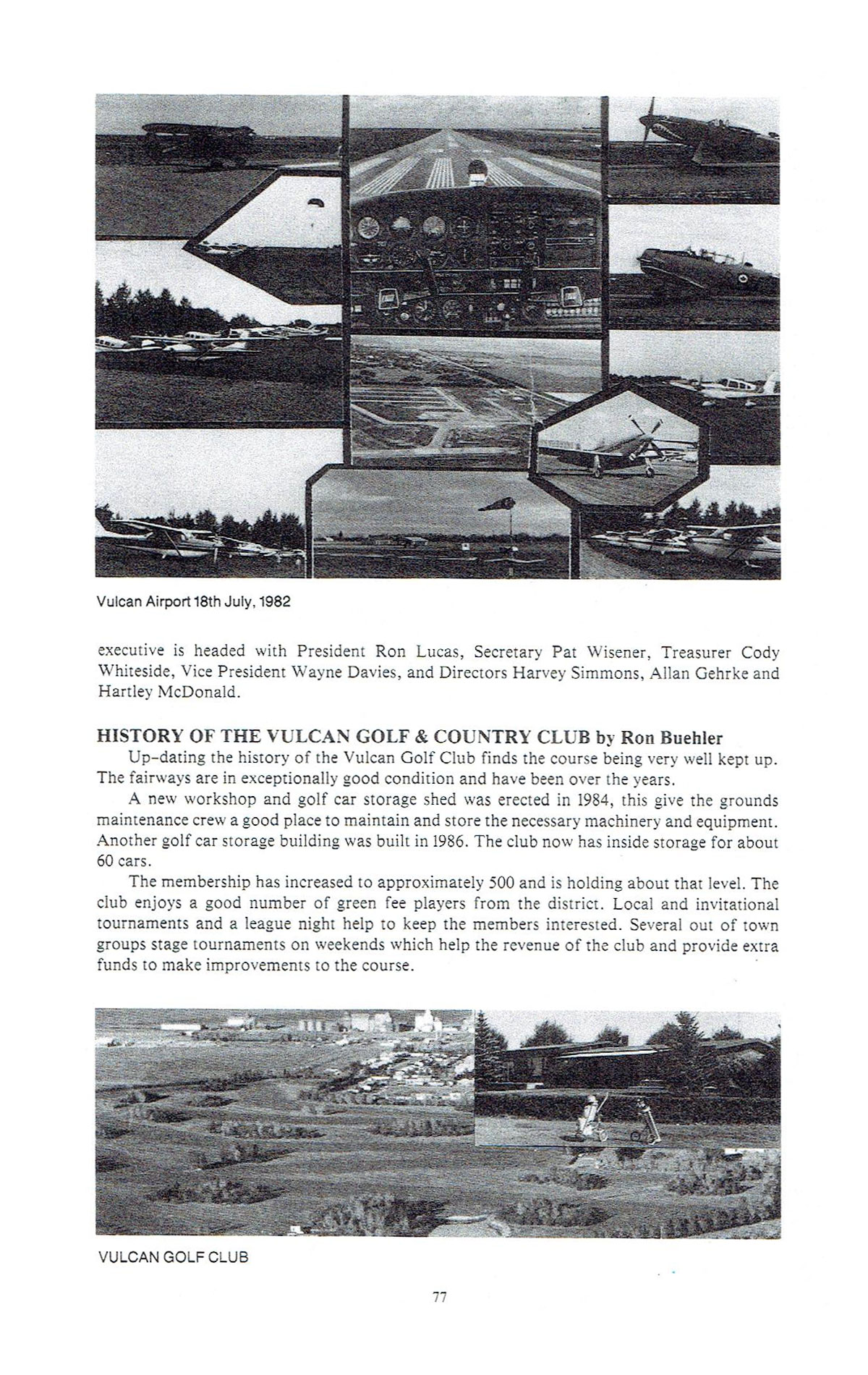 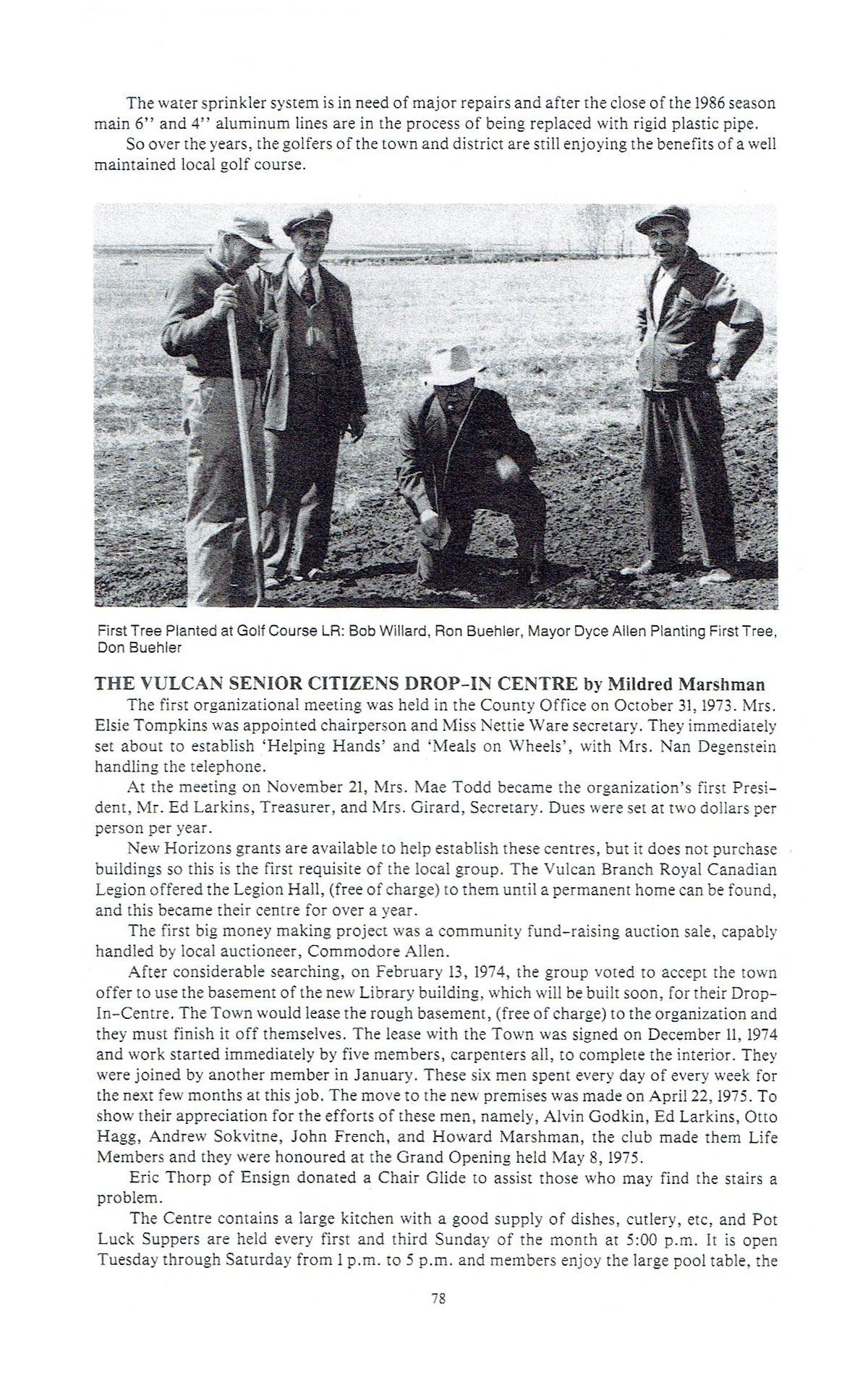 Friday Night at VGCC Bubba Bing...its Italia Night Lots of delicios Italian offerings and our basic fare as well. Hope to see you Friday. Dusty Rhodes Junior Program has begun at VGCC. It has been a slow weather start to the season but we are ramping up with the Dusty Rhodes program and initiating additional advanced Junior program as well as a little swingers program for our mini golfers ages 4-8. Stay tuned for more info. Registrations still being accepted for Dusty Rhodes, registrations for the new prorams will be starting soon. Friday nights have been rocking at VGCC. This week's plan will be released soon and remember the first nice Friday the BBQ is getting fired up. Good Alberta BBQ with all the fixins.